Random Rita ~ How to Get Some…Satisfaction!

I’m sure you are all familiar with the frustration of runnin’ out of fics that hold your interest past the first chapter, right?

Dare to take on the two COMPLETE fics I have for you today and you will get some…satisfaction LOL! 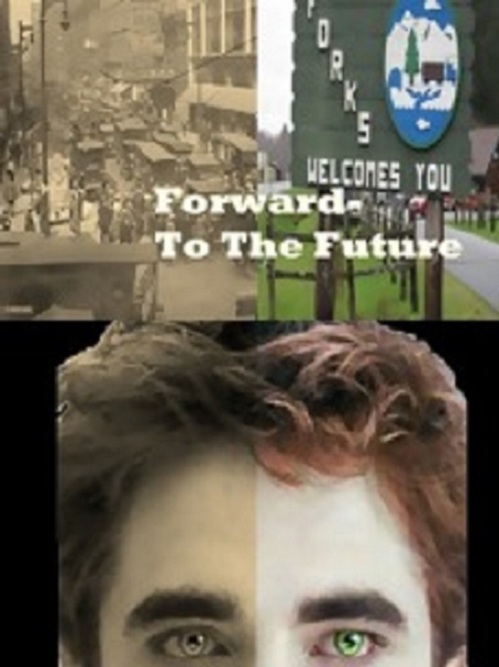 Complete. Human Edward from 1918 steps through time and finds himself in Forks. Hardships test his willpower as he meets vegetarian vampires, bloodsucking leeches, irritable wolf shapeshifters, and most terrifyingly, Mike Newton. Will he find a way back to his own time, or will he discover that modern day life has its own benefits? AU. EPOV.

Now, time travel is not a new concept for our fandom but this is one way time travel from 1918 Chicago to Forks 2004!

How did Edward time travel? How did Edward wind up with a house full of vampires? More importantly, how does he keep his sanity? Well, he keeps it with the help of each unique member of his new family, especially Jasper!

“Hey,” muttered Jasper at my door. It was now Sunday, and the Cullens had just returned home from their trip. I knew that Alice must have foreseen that there would be a disheartened teenage boy stewing in his room from the fact that Jasper was the first member of the family to greet me. I could almost sense him preparing himself to douse me in calming serenity.

“Hello,” I replied in a morose tone. I was standing at my bedroom window, watching a flock of Canadian geese land near the river behind the house.

“So… How’d school go?” Jasper always went straight to the jugular. He was never the sort to drag out conversations.

I took my time in answering him to ensure that I worded my thoughts correctly. “Jasper, did you ever have a day that felt as if The Fates were against you?”

He took a seat on my black leather couch, musing passively. “There was that one time when a newborn ripped my arm off and played ‘keep away’ with it for twenty miles. I caught up with her eventually, but it was all muddied up and dirty. Then, I had to mend it back to my shoulder while being pursued by the rival coven.”

Pinching the bridge of my nose, I replied, “Well, my day went something like that.”

Smiling halfheartedly, he said, “That bad?”

I turned away from the window. “Don’t get me wrong, some parts of the day were quite tolerable. A few of the students were even a bit more friendly towards me. But, I discovered that I don’t understand most of them… Did you know I heard a boy tell his girlfriend that she looked ’sick’? And she took it as a compliment?” I recounted to him, wearing a bewildered face. Jasper chuckled lightly but offered no comment. I continued, “Do you know what Jessica Stanley asked me?” Jasper shook his head. “She asked me what music I liked. I told her that I had many, though one of my favorites was Clair De Lune. She informed me that she ’had never heard of her before’.”

He threw back his head to laugh.

“And then, there was Lauren. She considers herself wellread because she reads every issue of Teen Vogue magazine,” I recalled, rolling my eyes from the memory. “Mike Newton informed me of a game he is currently waiting to debut. He described how in the game you can start gang wars, steal cars, and kill random strangers. And he was thrilled that he will be able to do those things himself, virtually, of course, come next month,” I recounted, unbelievingly. “If someone from my time were to express interest in going on a killing spree, either real or imaginary, he would have been thrown into an insane asylum.”

“The youth of today have been conditioned to accept that violence is an appropriate form of entertainment,” Jasper attempted to explain. “We’re both from eras where kids were expected to behave like miniature adults, and we did, for the most part. We dressed like adults, we read the books we were told to read, and we were expected to do what our parents said— without arguing. Today it’s the adults who want to be kids.” He chuckled at the thought. “Nearly everything is geared towards the younger generation. Music, video games, clothes, TV shows, movies— all are heavily influenced by the cultures of teenagers and young adults. Sex and violence are an integral part of today’s culture now.”

“I understand that times have changed, but have you not noticed how superficial most of them are now?” I questioned, irritated. “I had the privilege,” I spat out the word, “of witnessing a conversation where two shallow individuals grossly criticised a girl from across the room based solely on the way she dressed, insinuating that the girl was lacking in intelligence. I asked them if they knew her personally. They had never met the poor girl.”

He folded his arms, resting his index finger against his temple. “Surely there were unpleasant people in your time as well?”

“Of course there were,” I quickly replied. “But I spent this weekend thinking over a few things, and I discovered that I’ve always been a bit of an outsider. Even back in 1918, I sometimes felt like I didn’t belong. Now, seeing how most people interact with one another, the feeling is much more pronounced.”

“Not everyone today is like that. If you were to interact with more people you would see that for yourself… I think you need a companion,” he muttered thoughtfully. I was on the verge of reminding him that I lived with six people, but he did not allow me to speak. “A human companion,” he elaborated further.

Bella comes into the picture eventually and, when she does, it’s an even wilder journey from there on LOL!

My second complete rec is older…one of those “how did I miss this one?” fics LOL!

Bella once told a lie. A lie that cost her everything she ever wanted. 10 years later she returns to her hometown to an ailing father, an angry best friend, and the man from whom she has kept a secret that threatens to unravel her existence. M AU AH OOC Rated M for language and lemons **This story is a repost. It was previously posted in its entirety in 2011/12***

If you’ve ever gotten hooked on a decadent soap opera…my favorite used to be The Bold and The Beautiful, back in the day, on account of Ridge *swoon,* this fic will feed that addiction!
I step through the door into the thronging mall. People are hurrying in all directions, and in my preoccupation I walk straight into someone and my bag goes flying. I watch, helpless, as the contents spill out onto the shiny tile floor. I get down on my knees and hastily start scooping everything up, aware that at any given moment my fingers could be crushed by the stomping feet surrounding me.

“Shit!” I hiss as a lipstick I don’t even wear rolls away from me and I stretch to catch it. People seem oblivious and barely move out of my way as I crawl across the floor, chasing random objects.

“Mom,” Jacob says, tapping my back as I scan the floor to see if there is anything I’ve missed.

“Give me a second, sweetie,” I reply, irritated by the people kicking my things away from my fingers. I grab my hairbrush just before it is crushed by a man’s huge boot. I glower up at him but he doesn’t even notice me as he strides past.

He tugs at my collar and I look up to see him looking over to my left. “Mom, why is that woman staring at me like that?”

“What woman?” I ask in confusion as I give the floor one last glance before getting to my feet.

I follow his gaze and my blood turns to ice. Alice is standing not three feet away from us. Her wide, bewildered eyes are focused on Jacob.

Panic grips me. My heart soars into my throat when I see her mouth open in a shocked “O,” and the recognition evident in her eyes.

Needless to say, it doesn’t take long for word of Jacob’s existence to reach Edward!

Turning onto our street, I spot it straight way: A sleek black sports car is parked a little way along the road from our house.

My knuckles tighten on the wheel.

Pins and needles prickle my skin.

And I’m not ready.

Tapping Charlie’s thigh to catch his attention, I nod towards it. Charlie stiffens as soon as he lays eyes on it, convincing me he too is thinking the same as I am. He briefly looks at Jacob warily, before turning back to me.

I turn into the driveway, racking my brains, wondering how I’m going to get Jacob into the house before he reaches us.

Charlie is singing from the same hymn sheet. “You two go in and I’ll get the stuff from the trunk,” he says, trying and failing, to sound normal.

“No!” My voice is a little louder than I had intended, so I lower it quickly. “Jacob, you go in and take a shower and I’ll help Grandpa with the gear.”

Blissfully oblivious, Jacob shrugs, takes the keys from me and we all get out of the car together. I look around wildly, expecting Edward to come rushing into the yard, but thankfully there’s no sign of him. Yet.

Jacob disappears inside, and I rush around the car to Charlie. “Go inside,” I plead. “Make sure Jacob doesn’t come out. I’ll deal with this.”

“I’m not leaving you to do this alone!” he protests. “We don’t even know if it’s him. Let me check.”

When I hear a car door slam and my voice is more urgent.

“Please Dad, I need you to stay in there with Jacob. Let me handle this!”

He opens his mouth to argue but I am already backing away towards the street. “Please!”

I turn, and step out of the yard onto the street.

And there he is.

At first, nothing registers but the need to get him away from here. I rush towards him.

“NO!” I yell as he strides towards me.

“Where is he?” he barks, stalking towards me and showing no signs of stopping.

Fearing he’ll simply walk straight past me, I step in front of him and push my hands into his chest. “You can’t do this, you can’t just show up and demand to see him!”

His emerald eyes are menacing as he glares down at me. He grips my forearms as if he’s going to throw me to the curb.

“Take your hands off her!”

I turn to see Charlie coming towards us. His face is rigid with anger.

“I came to see my son, Charlie,” Edward says in a tone that suggests he won’t leave till he gets what he wants.

Charlie lays a hand on my shoulder when he reaches us, but his eyes never leave Edward’s face. “You need to go calm down first.” Charlie says, staring at Edward with steely determination. “Unless you want the boy to be afraid of you?”

Edward says nothing, and I only realize he is still gripping me as his fingers loosen and he lets go. Charlie looks down at me and nods grimly.

Charlie backs away reluctantly, and as soon as he’s out of sight, Edward grips my forearm again.

I whirl to face him, ready to order him to let me go, but the venomous look on his face stops me in my tracks. “You have one hour to tell him I’m here and then I’m coming in, ready or not!” he says through gritted teeth.

There will be fireworks so make sure you’re all stocked up on your favorite soft drink and popcorn LOL!
Happy Saturday, y’all!
Rita